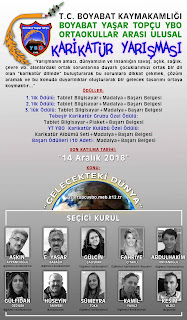 
* Boyabat Yasar Gunner Boarding Secondary School , which trained village children and especially pictures and a boarding school known for its national and international success in the cartoon field.
* The aim of the competition is our world and humanity’s war, hunger, health, environmental and so on. the common problem sensitive to our kids shared a language areas "in the language of comics" bringing attention to these problems, the solution search and reveal a future design for creating awareness on this issue …

1- The contest’s theme is " FUTURE WORLD "
2- contest the general public and all private Turkey 5-6-7-8 secondary schools. class is open to.
3- cartoons minimum A4 (21 X 7.29 cm) and maximum A3 (7.29 X 42 cm) should be in size.
Competitors can submit up to three 4-cartoon contest.
5- to send cartoons may have been published previously, but must not have received any prize in any competition before.
6- Another cartoon from cartoonist of "copy as", exchanged jokes "redraw" and cartoons containing adult intervention will be excluded from the competition by the selection committee and the participants will be in the responsibility in this regard.
Any technical 7- to send in cartoons (black-white, color, digital, etc.) Were released. And computer-generated digital printing works which will be acceptable provided they are signed.
8-cartoon contest the award and the exhibition will be collected in an album and work with documents will be sent to the success of artists located.
9- The cartoons "participants (parents of students) Subject to the consent" will not be sent back, exhibition, album and so on. It can be used for cultural events.
10. Participants in big letters behind the name of the cartoon, surname, age, school, class, school address and school phone should be written.
11 of cartoons to be sent no later than December 14, 2018 on Friday until the end of business hours " Yasar Topcu SWO, Secondary Inter National Cartoon Contest BOYABAT / SÝNOP " should be reached shortly.
12. Prizes ;
1st Prize: Certificate of Achievement Medal + Tablet PC +
2 nd Prize: Tablet PC + Medal and Certificate of Achievement
3rd Prize: Tablet PC + Certificate of Achievement Medal and
chalk Cartoon Group Special Award: Tablet PC + Plaque + Certificate of achievement
PT YBOU Cartoon Club Special Award: Cartoon Album Set + Medal and Certificate of achievement
Award (10 units): Certificate of achievement Medal.
13. Contest Results Thursday, January 10 for " yasartopcuybo.meb.k12.t is " the address will be announced through social media and the press. Exhibition and awards ceremony will be held at a date to be announced later in Boyabat. Accommodation and meal expenses other than travel costs of participating in the ceremony will be met. Cartoonists unable to attend the awards ceremony will be sent to the address.
14- The competition jury members and organizers of the competition with first-degree relatives "Yasar Topcu SWO" students participate.
15. Competition jury : Love Ayrancioglu (Educator / Cartoonist), Erhan Yasar FATHERHOOD (educator-Cartoonist), Gülçin CALISKAN (Student-Cartoonist), Fahriye ÇITAKL (Lecturer-Cartoonist), Abdulhakim ORHANOÐL (Student-Cartoonist), Gülfidan Ozdilek ( educators-cartoonist), Hussein TANYERÝ (cartoonist), Sümeyra BUCKLE (Student-Cartoonist), Kamil Yavuz (educator-Cartoonist), Cutting STAR (Reporter)
16 illustrators participating in the contest are deemed to accept the above conditions.

(Note: Currently 8 students studying in grade 9 must send-works from the beginning of the academic year -next before the start of class …)   "Future World" MizLiz about their hopes, concerns, ideas, designs will share with us thank our young cartoonist, we wish you success …